A historical ring with a romantic inscription was found five inches under ground. 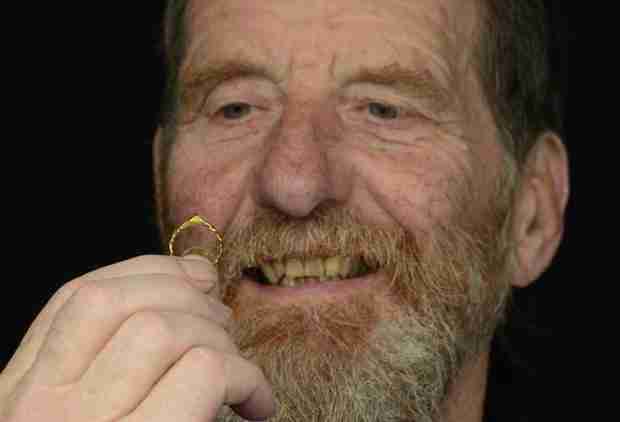 An exciting 2019 discovery sent ripples through the world of antique collectors when a medieval ring was found on a farm in southwest England’s Dorset County. The ring, which dates back to the late 14th century, hit the auction block in a much-anticipated sale.

The man responsible for the discovery is David Board, a retired metal detectorist who had given up the hobby 40 years ago but recently decided to take it up again. After obtaining permission from a farmer friend, he searched a field called Bowling Green. On his third visit, he struck gold.

David Board took up metal detecting again in 2019 after a previous attempt in the 1970s yielded no significant findings. On this particular search, his metal detector picked up something buried about five inches underground. After retrieving the object and cleaning it off at home, he uncovered this medieval gold and diamond ring.

After visiting the British Museum, he learned that the find was even better than he thought. Board plans to use his share of the proceeds from the auction to help his partner’s daughter secure a mortgage.

The 14th-century artifact is described as an “inscribed love ring” with two entwined bands. It is in “very fine condition,” according to Noonans Mayfair, the London-based auction house that handled the sale. Before the auction, the estimated price was 30,000 to 40,000 pounds.

The center of the ring is set with an inverted pyramid-shaped diamond, typical of the period. And perhaps the most exciting find is what was written inside. The interior of the ring has a black letter inscription in medieval French. It reads “ieo vos * tien * foi * tenes * le moy,” which translates to “As I hold your faith, hold mine.”

This discovery has raised questions about the potential for such valuable treasures to be found by hobbyists using metal detectors. It remains to be seen what other prized antique jewelry may be unearthed in the fields and farms of England.

The Meaning of Family Heirlooms: Connecting Past and Present

An Antique Bed Helps a Collector Fall in Love With Antiquing

A Converted Sled Finds New Life as a Plant Stand